What an emotional weekend! Spent Thursday evening packing my equipment and prepping my bike for the Dirty Kanza 100 Half Pint, that’s the 100 mile version of the Dirty Kansas 200 mile gavel endurance race though the Flint Hills of Kansas just outside of Emporia.

I was full of excitement as I drove to 99 miles to Emporia on Friday morning as my mind was racing with thoughts from did I pack everything I needed and did I train hard enough? (More on the training later) Downtown Emporia was hopping with people and excitement as I pulled into town to get registered for my race, this town really pulls out all the stops to support this event. Everyone was very supporting even the Emporia State people working their tent as I asked (Wearing my Northwest polo) where was the Northwest tent? I hooked up with Stephen and Kim Johnson who have been to ones who have gotten me into this world of gavel riding and have been more than supportive in my training. During the rider’s meeting they were excited about the course packed and dry condition and were expecting a new record time. 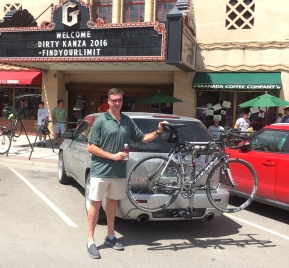 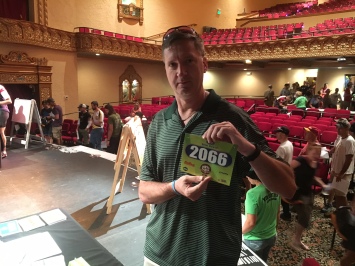 I first heard about the passing of Muhammad Ali as I was getting settled into bed for a good night rest before we had to get up at 4 AM to get ready for the 6 AM race start. I spent the next hour laying in the dark thinking about all he had accomplice in his life from his boxing career to his fight with Parkinson’s, the image of him lighting the Olympic touch as he shook with excitement from the effects of Parkinson’s. I thank god for all that Muhammad has done for raising awareness for Parkinson’s. after I was diagnosed with Parkinson’s and I was reading up on this disease it was one of his quotes that help get me going in my awareness and fund raising campaign, “Service to others is the rent you pay for your room here on earth.”

I awoke to the sound of thunder, how far off I wondered. (Always wanted to say that) looked at my clock and it was 3:30 AM, no one had said anything about rain this weekend! Thankfully the storm moved though fast but as we would find out later it was a very heavy downpour. As I got into line for the rolling start of the DK100 I was making sure that I was near the rear of the pack being my first gavel race. As they announced the 10 second countdown the streets came alive with the sounds of cheering and cowbells from the hundreds that showed up to see us off, what a impressed slight to experience! It was an easy escorted pace to the edge of town where I would get my first taste of what the storm had left behind, there was a back log of riders waiting to take their turn down the first road as it was covered with 10-12 inches of water, as I would see very soon it’s not the water but the mud that would play hell on riders drivetrains and put many of the DK200 rider down for repairs very early in the race. As the preview showed after the flooding the next 5 miles were at a good easy grade and pace, a bit slow from being bunched up though, then the famous flint gavel and start of the hills. The flint gavel got me at mile 20 with a flat tire, 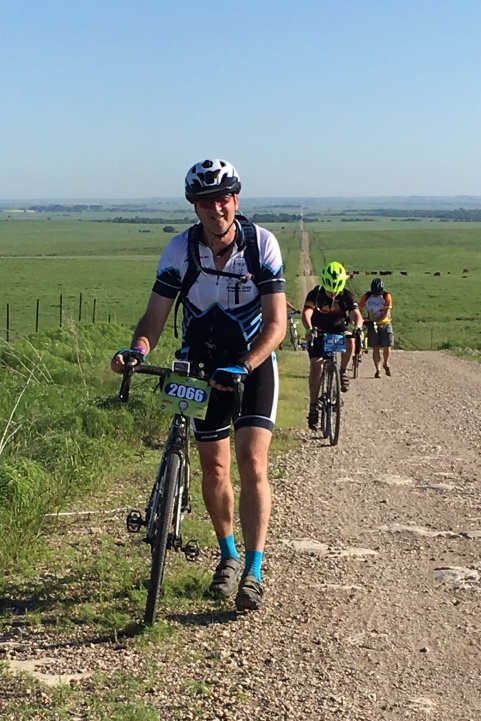 I was impressed with my tire tube exchange time since it has been 30 some years since the last time I changed on out!  After over 2 ½ hours of riding the first cramp set in on my left calf it wasn’t bad at first but very nagging. I think it was more of the heat that got to me after the 34 mile mark and I was drained by the 38 mile mark and decided to pull the plug and call support to come fetch me. As I waited there for a 45 minutes (they told me 20 minutes) I meet a new friend in Shannon Bond who was in the DK200 and was one of the riders taken victim by the flood water and mud early in his race, stopped to see if I was okay, he had broken his derailleur hanger and had converted his 11 speed to an single speed. Shannon was wearing a Cycle City Team jersey which is Joe Fox’s store in Parkville where I have purchased my Cannondale which Shannon was riding also. After seeing that he knew he was not going to make the cutoff time at the checkpoint to continue the DK200, but was determined to make it into a 100 mile event with one speed I offered to let him take whatever he needed off my bike to help him finished. 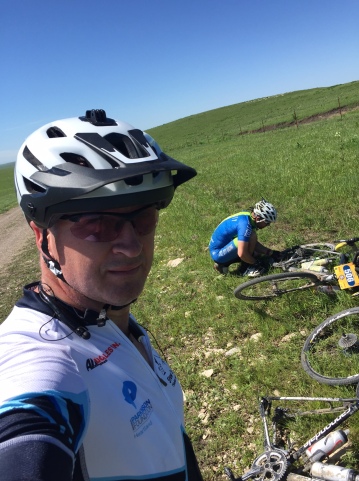 Now as Shannon got his bike going again I notice it had been an hour and a half since I was to be picked up, I called and was informed that a rider injury that was requiring a life flight out of the flint hills it would be another hour to get to me. As I sat there next to my now in pieces bike I realized that I haven’t seen another rider for 30 minutes and with the recovery time I  was having regrets for throwing in the towel, but once the call was made I was officially out of the race and my bike was un ride able now to boot. You don’t realize just how far off the beaten path you are till the Kansas City Jeep Club pick you up and it take 30 minutes to get you back to the nearest check point.

As the next couple of hours passed I was feeling very disappointed in myself for not finishing and for letting down all my supporters who have been backing me for the past months. I was feeling depressed enough that once I got back to the hotel I packed up and drove home instead of attending the block party and celebrate the arrivals of the ones who finished their race. My depression quickly went away as I got on my computer and read all the comments on Facebook from friends and family sharing their feelings of my attempt and I realized that they all looked at it like it was a victory not a defeat. It was Sunday afternoon that I got online to view the results from the DK and saw that of the 1,600 riders in the two races only 1,053 finished.

Looking back on my training for the race I now know where I need to focus my efforts for next year’s DK and after a week off I will start training for it and I will finish this time. I was reading some more on Muhammad tonight and came across this quote of his and feel it’s a perfect way to end this.

Thanks to all my friends that believe in me, Stew