Just how far is 153 Feet, 51 yards, 46 meters? Well for me it’s the difference in elevation between my house and the Plaza here in KC. Now I know some of you are asking just how does Stew knows that, and some are thinking that Stew has too much time on his hands! This wisdom did not just pop up on the Discovery channel, no it was served up to me in brute real time reality. It was last week as I decided the back up what I’ve been preaching these last three years and get off my butt and “Move” for I’ve been lazy way to long and neglecting my body.

As I took my cross bike down from the rack I had so carefully placed him on around 7 years ago! I kept telling myself no big deal, it’s just like riding a bike; well duh it is just a bike right? After a day trip for my bike to the bike spa for a quick check up and tune it was back to my house for a peaceful ride along the trolley trail down to the edge of the Plaza and back. 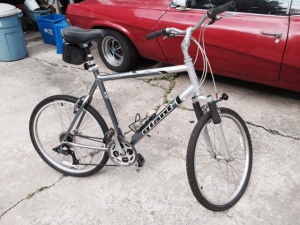 Well my friends, the first half was a joy feeling the wind in my face and cruising along with ease. Even as I made the turn around to return to home base I had no idea what I had gotten into this day. In less than 100 yards my legs were on fire and I was down shifting to keep moving and after another couple of blocks I found myself off the bike and doing the walk of shame pushing this high tech machine up this gentle slope towards home, this it turns out was one of three times I had to dismount and stroll along side my bike for a block like I was walking a Great Dane.

Sitting down and feeling defeated and embarrassed by my failure at my personal “Tour De France” I notice that burning feeling in my legs from this failure, this was a feeling that I have not had for way too long. Two days later with a determination not to be defeated by this ego busting route I was back on the bike and armed with a new mapping app and had just watched “Hoosiers” for motivation (No I didn’t) I was on my way!

As I stood on the podium to accept my yellow shirt that evening I was thinking how great of feeling it was to beat this monster of a course and take the long hill back without stopping for a walk of shame. These first two rides have open my eyes to things I take for granted which with Parkinson’s I cannot afford to any more, for most of my friends “Moving Day” is a once a year event for me it a challenge each and every day and I need to keep ahead of it. Yes my new app told me it was just 153 feet and not the French Alps, but even mountains started out as hills, Trust me life will put some mountains in front of you, it’s up to you if you want to climb them or not. As for me I’m looking forward to the climb!